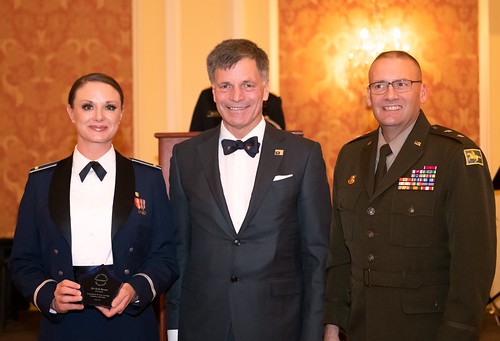 CHEYENNE, Wyo. – Three Wyoming National Guard members were recognized as the Wyoming Military Department’s Heroes Among Us for 2019.

Gov. Mark Gordon and Maj. Gen. Greg Porter distributed the awards Nov. 2, during the annual Governor’s Reception, in Cheyenne. The Heroes Among Us Award recognizes heroic efforts of Wyoming Military Department personnel who assist fellow citizens outside the scope of their military duties.

Porter, Wyoming’s adjutant general, said the awardees represent the department well. “It’s important to recognize the airmen and soldiers who go above and beyond to assist those in need. These men and women are assets to the Wyoming National Guard and I salute them.”

View more photos from the Governor’s reception on our Flickr Page.