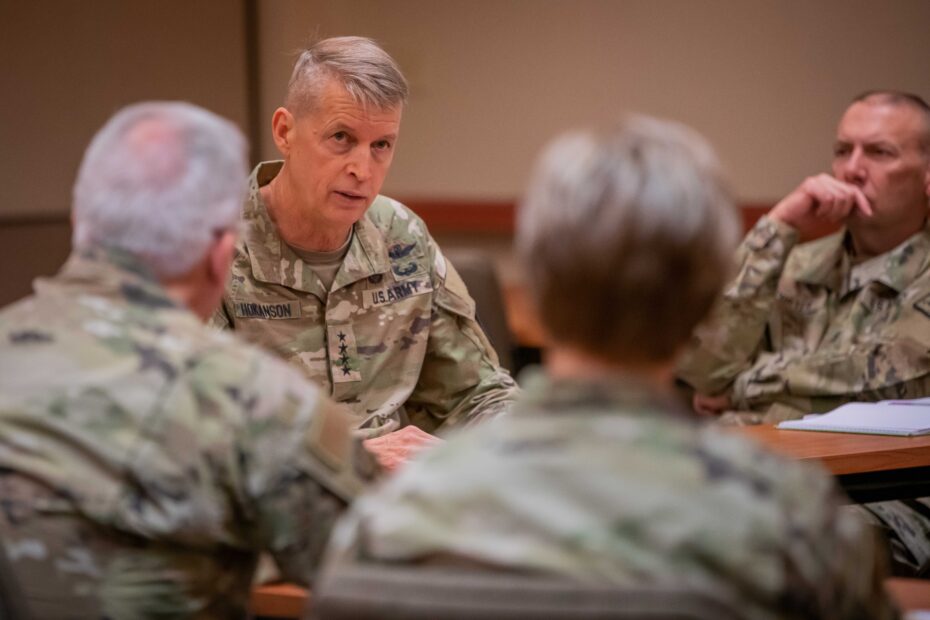 Hokanson and Whitehead traveled to Cheyenne with several objectives in mind and with a full schedule of engagements. First and foremost, he wanted to interact with Wyoming Army and Air Guard Members and Recruiters for a firsthand understanding of how service members are faring. “I’m the channel of communications between the 54 National Guard Headquarters and the Department of Defense, and in order to tell that story, I’ve got to visit with our folks and see what’s really going on. And frankly, I’m here to help sell the Guard story because there’s so much we do every single day that many Americans are unaware of.” Hokanson said.

Though Hokanson and his team’s time in Wyoming was short, they were able to accomplish a lot of meaningful interactions. From meeting with delegates from Wyoming’s sister country of Tunisia and the State Partnership Program managers, to conducting professional development discussions with Wyoming National Guard senior leaders, and engaging with Wyoming’s civic leaders and elected officials. In addition, Hokanson served as Grand Marshall for the final Cheyenne Frontier Days parade fully experiencing the Spirit of Cheyenne up close – while attending some limited Cheyenne Frontier Days events.

While meeting with Wyoming’s top Army and Air National Guard recruiters, Hokanson emphasized the importance of welcoming everyone, with or without experience or exposure to the United States military, to avoid the growing concern that military service is becoming a family business. Promotion and communication of the benefits and opportunities offered by the National Guard are essential in this ongoing effort as we continue to increase our accessions pool. He applauded the individual approach and care given to recruiting applicants as a strength unique to the National Guard that must continue.

Hokanson engaged in an open question-and-answer session with several senior officers providing insights and guidance on various subjects. The officers discussed flexibility in using limited resources allotted to Wyoming, current and future organization structure, ongoing C-130 modernization, and the need for authentic leaders who can solve complex problems, employ critical thinking, and who are not unnecessarily risk-averse.

The Tunisian delegation comprising Haneene Tajouri Bessassi, first female Tunisian Ambassador to the United States, and Senior Col. Mohammed Ben Salah, Tunisian Defense Attaché, met with Hokanson while in Cheyenne. They received a briefing from the 84th Civil Support Team commander on a recent training exercise in Tunisia, enjoyed a good discussion about Wyoming’s State Partnership Program with Tunisia, and the value this partnership delivers to Tunisian military service members.

“The partnership we saw today with the Tunisian Ambassador, who talked about the value of the state partnership program and those relationships, just adds power and strength to our national defense strategy,” Hokanson said. He continued, “They’re familiar with the value that the state partnership brings and its enduring relationships. Our national defense strategy is very clear, allies and partners are absolutely critical to us. And they’re one of the great advantages the United States has.”

Hokanson also attended a reception hosted by Gov. Mark Gordon, where he met and visited with several senior civic leaders and elected state officials about the benefits of the National Guard service in Wyoming.

“Many Americans don’t know how involved the Guard is in every aspect of a natural disaster and emergency response. But when it hits home, people realize, wow, it’s one of the great things our National Guard can do. But in everything we do, it’s the partnership at the local level,” said Hokanson, “We’ve got armories in all these communities, our soldiers and airmen, their friends and their co-workers, and they work alongside their first responders, their state emergency managers, the FEMA regional managers and because we work together all the time, if anything happens in our communities, we can help. If it’s an emergency and they require our assistance, we’re right there.”