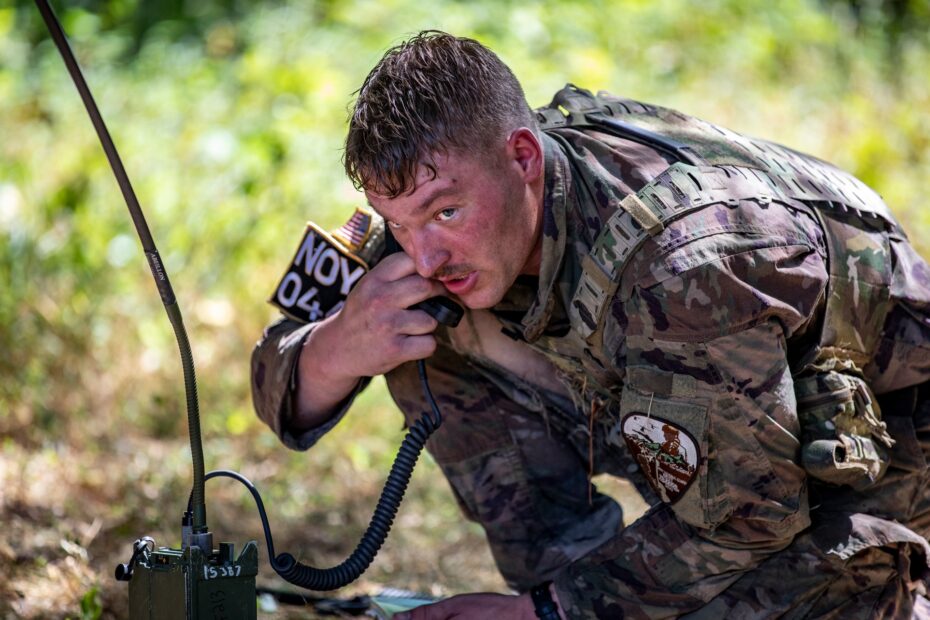 Sgt. Tyler Holloway, a fire support specialist with the 115th Field Artillery Brigade in the Wyoming Army National Guard, was named top Non-Commissioned Officer of the Year in the Army National Guard. He earned this distinction by winning the 2022 All-Guard Best Warrior Competition held July 22-29 in Tennessee.

Sgt. Spencer Fayles, a combat medic with the 144th Area Support Medical Co. in the Utah Army National Guard, was named top Soldier of the Year for the competition.

The announcement came on July 29, 2022, in Nashville at the Old Hickory Country Club. Fourteen competitors and dozens of other Army and Air National Guard staff and supporters gathered in a ceremony to celebrate the accomplishments of these Soldiers over the previous week.

Sgt. Holloway is the first Wyoming Soldier to earn the distinction of Non-Commissioned Officer of the Year for the Army National Guard. “We’ve had other Soldiers win the regional event, but this is the first time a Wyoming Soldier has topped the entire field. Watching Sgt. Holloway train and perform reminded me of all we have to be proud of in Wyoming,” added Command Sgt. Major Lindsay Schmidt, state command sergeant major of the Wyoming Army National Guard.

On July 22, Soldiers from Hawaii, Maryland, Minnesota, Nebraska, New York, Oregon, Rhode Island, Tennessee, Texas, Utah, West Virginia, and Wyoming gathered in Tennessee. Each represented a region after winning top honors in smaller, regional competitions. They are the best-of-the-best in the nation for the Army National Guard.

The weeklong national competition took place in five locations across the state of Tennessee. The grueling competition put the Soldiers through daunting tasks that tested their soldiering abilities mentally and physically.

More than 30 graded events had the competitors running through tasks that included water survival, combat fitness tests, combat casualty care, and marksmanship drills. There was a high-value target extraction where fire teams infiltrated a complex together in teams. There was also a Valor Run, where competitors went through simulated tasks based on actual events experienced by Medal of Honor recipients. These are just a few examples of the high-intensity events that occurred.

Humor raised the spirits of Holloway and his 13 fellow competitors through the grueling competition.

“I always try to laugh through the pain, and if I can joke around and make someone else smile and take their mind off the pain, then I know I’m making it easier for them and myself,” Holloway said.

Holloway often joked, trying to get a laugh out of his fellow competitors whenever they had a little downtime between events. The camaraderie among the competitors was like no other. You could tell that it was infectious.

Every competitor pushed themselves to their limits and beyond. You could see it in their faces, especially at the end of each event they finished.

“I have learned the limits I can push myself are much further than I would have imagined,” said Holloway. “I have also learned that I don’t give myself enough credit regarding my knowledge of certain tactics and techniques. It’s truly made me a better NCO and allows me to extend influence around me.”

The final event was a 16-mile ruck march through Lynchburg, Tennessee. Competitors trucked along the busy roads of the rural town with all of their gear on their backs. Towards the end, they carried their respective state flags across the finish line. You could feel the relief coming from the Soldiers as they crossed the finish line and realized they had reached the end of the competition.

“Competitions like this inspire our Soldiers to strive for excellence and to find their limits and exceed them,” said Command Sgt. Maj. Dale Crockett, command sergeant major of the Tennessee Army National Guard. “Tough, realistic training is critical to ensuring prepared Soldiers to fight and win our nation’s battles. These highly trained and disciplined Soldiers are role models for our formations to emulate.”

“Having a Wyoming Soldier bring home this incredible honor is humbling,” said Maj. Gen. Gregory Porter, Wyoming’s adjutant general. “I am proud of Sgt. Holloway and I know that this event represented months of individual training. He set a goal to perform and win at this level and he made Wyoming proud. Sgt. Holloway represents the lethality of the Wyoming National Guard and last week in Tennessee, he rode for the brand!”

Holloway and Fayles will compete against teams from the Regular Army and Army Reserves this fall with the rest of their squad, Staff Sgt. Bryan Kummer of the Nebraska Army National Guard, Spc. Austin Manville of the New York National Guard, and Spc. Nathaniel Miska of the Minnesota National Guard.