Looking through pictures of Wyoming Air National Guard aircraft over the last ten years, one picture stands out. An eight year old image of a single C-130H Hercules aircraft with eight-bladed propellers parked on the ramp at dusk, foretelling the modernization of the C-130 fleet.
The wing assisted with developmental testing by providing a dedicated aircraft and additional crew members for testing with the Electronic Propeller Control System (EPCS) and NP2000 eight-bladed propellers in June 2008. This test represented an option for the Air Force and Air National Guard to modernize the C-130H fleet through a comprehensive propulsion upgrade allowing for increased performance, efficiency and reliability.

The electronic propeller control modification has provided at minimum 50 percent increase in reliability due to the replacement of the hydraulic valve housing with an electronic version to drive the propeller. Along with the increased reliability, it has greatly improved acceleration response when the throttles are rapidly advanced. The NP2000, when it was installed, reduced propeller maintenance hours, greatly reduced sound and vibrations on the C-130 flight deck, and shortened takeoff distances by nearly ten percent. 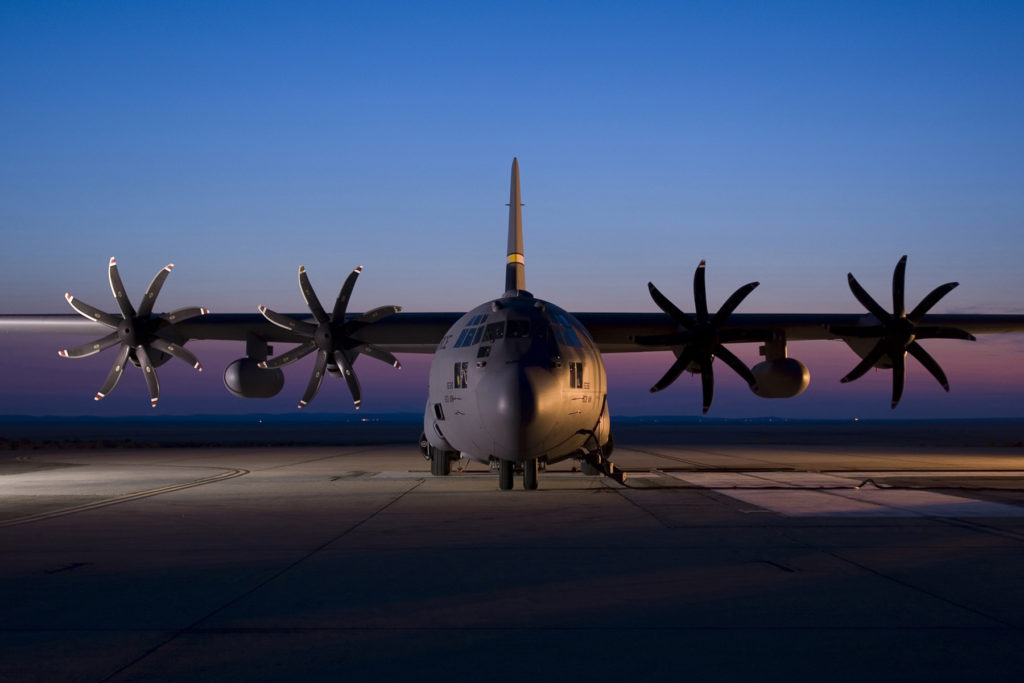 A C-130H Hercules aircraft assigned to the 153rd Airlift Wing, Wyoming Air National Guard is seen parked on the ramp at Edwards AFB in California. The C-130 is modified with an Electronic Propeller Control System and eight-bladed propeller system. (Courtesy photo)

Fast forward to 2016, and the maintenance group has been working for the past year to ready aircraft to accept the 3.5 engine enhancement modification. In early September the first aircraft will be modified with four 3.5 engines at Little Rock Air Force Base. Following the first flight in mid-September, the aircraft will begin an operational use evaluation test program at the jointly run Air National Guard and Air Force Reserve test center in Tucson, Arizona. By early 2017, the advanced NP2000 propellers will once again be installed on a separate Wyoming Air National Guard aircraft with the 3.5 modified engine and will undergo a concurrent operational use evaluation test program.

“As both a maintenance officer and a pilot, I am excited for the propulsion system improvements we are undertaking at the Wyoming Air Guard,” said Lt. Col. Todd Davis, 153rd Aircraft Maintenance Squadron commander. “The amount of maintenance manpower reductions will greatly increase our mission capability rate and offer a more reliable aircraft to our flight crews operating in demanding environments at deployed locations and during our domestic support missions such as aerial firefighting. We have worked with National Guard Bureau for many years on these projects and to finally see them come to fruition is a welcome sight.”

The second improvement, which is also the most visible change, involves replacing the current four bladed metal propellers with a modular and composite eight-bladed propeller system which will be digitally controlled, resulting in greatly increased low speed operational performance and decreased propeller maintenance time.

“From a maintainer’s perspective, the upgraded engine will give us the advantage of cooler starting temperature, cooler turbine inlet temperatures, as well as more performance at lower power settings,” said Senior Master Sgt. Max Duran, 153rd Maintenance Squadron propulsion supervisor. “These upgrades will extend the life of the T56 engine. It equates to longer time on wing, less major overhaul maintenance, and extended life of the engine module, as well as increased efficiency.”

The C-130 remains the primary aircraft for dropping cargo to forward operating bases in continuing combat operations overseas. Additionally, increased reliance on domestic operations support in the homeland including natural disaster assistance and firefighting efforts have underscored the need for an increase in aircraft performance, fuel efficiency and reliability for the legacy C-130H fleet.