CAMP GUERNSEY JOINT TRAINING CENTER, Wyo.—Fire season may appear far away with a recent snowfall, but it is actually just around the corner. Already, there have been fires in California, and officials predict this year will be one of the worst in recorded history, even comparing last year when Paradise, one of California’s smaller towns, was reduced to ashes in a matter of hours.

That’s why it’s important for firefighters to stay current on their certifications, including here in Wyoming, with the aim of protecting lives and property. 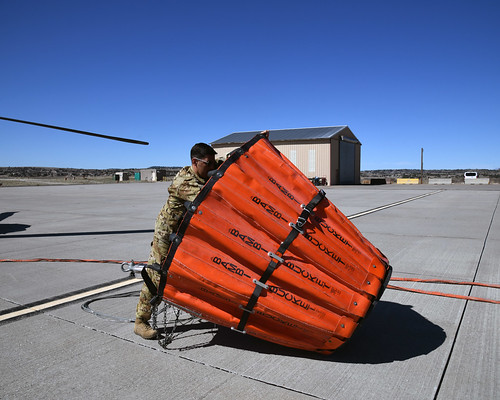 Recently Camp Guernsey hosted several agencies, including the Laramie Fire Department and the Bureau of Land Management at an annual training exercise that evolved from an opportunity to combine efforts in 2013. The informally known ‘bucket drops’ invited aviators and firefighters to hone their specific skills, but importantly to improve communication when the call goes out for a response to fires.

According to Chief Alan Baldy, in his third year with the Camp Guernsey Fire Department, the annual exercise gives both firefighters and air crews the chance to recertify.

“This exercise helps us recertify air crews and fire department, and improves our operations and coordination with multiple agencies. We have the opportunity to sign wildland task books on different levels. One task is calling in aircraft,” Baldy said, explaining the exercise’s significance. “When we have a controlled burn like this we can get quite a few tasks done. Among them, we can rotate people on incident commands, controlled burns, safety briefs, and overall prepare for the upcoming fire season. Prescribed burns help mitigate potential wildfires. The ‘bucket drops’ are tied into our plan, in which we’ve got some areas identified as higher risk.”

The four firefighters from Laramie and four observers from the BLM joined Camp Guernsey’s eight firefighters in setting controlled burns which were within minutes doused by Wyoming Army National Guard UH-60 Black Hawk air crews based at the Army Air Support Facility, in Cheyenne.

“What an opportunity to do a real controlled burn fire with smoke, guys on the ground coordinating with pilots that overfly the area,” said Maj. Jason Miller, manager at the Camp Guernsey Army Airfield, and a UH-60 pilot. “We know it’s inevitable that these two entities will eventually work together. Six years ago, it really started with, ‘Hey, why don’t we get together and make this happen?’ We were able to do that with great success. Every year since then, we’ve tried to build on that success.”

The rest of the Black Hawk crew included instructor pilot Chief Warrant Officer 3 Steven Atencio, flight operations officer Chief Warrant Officer 3 Michael Reisig, and crew chief Staff Sgt. Keith Snipes. The air crew ran a total of 10 drops that day using a bright orange ‘Bambi Bucket’ that can carry roughly 560 gallons of water. The air crew drew from the nearby Guernsey Reservoir and flew to select locations around the training center’s North Training Area, while a group of firefighters lit grassy areas, marking them with colored smoke. After a few passes to measure their target, the air crew then released the water with precision strikes, leaving behind charred, smoldering patches.

Miller added, “We were looking to validate the response time in the event that we had a wildfire, and we needed to bring an aircraft up here–well how long for that aircraft to respond so we know to plan those standby missions. So, that was the next step. It gave us the opportunity to say, ‘OK, we know that if they’re on a standby mission, we can expect water on fire in this amount of time.’ It gives us the added capability. Wyoming being a high risk fire danger area especially with some of the training missions we do, (which include artillery) we want to mitigate that risk as best we can.”