The Joint Forces Readiness Center played host to a Wyoming Vietnam War veteran panel that was organized by PBS on Monday. Three veterans, all current residents of the state, discussed their war experiences on a record-to-air taping that will be aired Friday in conjunction with Ken Burns’ “The Vietnam War” documentary.

Moderated by PBS’ Craig Blumenshine, vets Scott Ratliff, Lee Alley and Dr. William Gribb answered questions about their arrivals in Vietnam, political climate at the time and civic duty to serve their nation.

All three men had seen combat while in South Vietnam. Ratliff was drafted and arrived in country in 1967, saw fighting northwest of Saigon before being wounded by gunfire. He would eventually lose the use of his right arm.

Gribb was also drafted and stationed along the Cambodian border in 1968. In August 1969, he was severely wounded and spent two and half months in hospitals. Lee Alley is well known within the Wyoming Military Department for his time on the Wyoming Veterans Commission. However, he was also a highly decorated Wyoming native during the war, seeing combat as a tank officer in charge of infantry units. 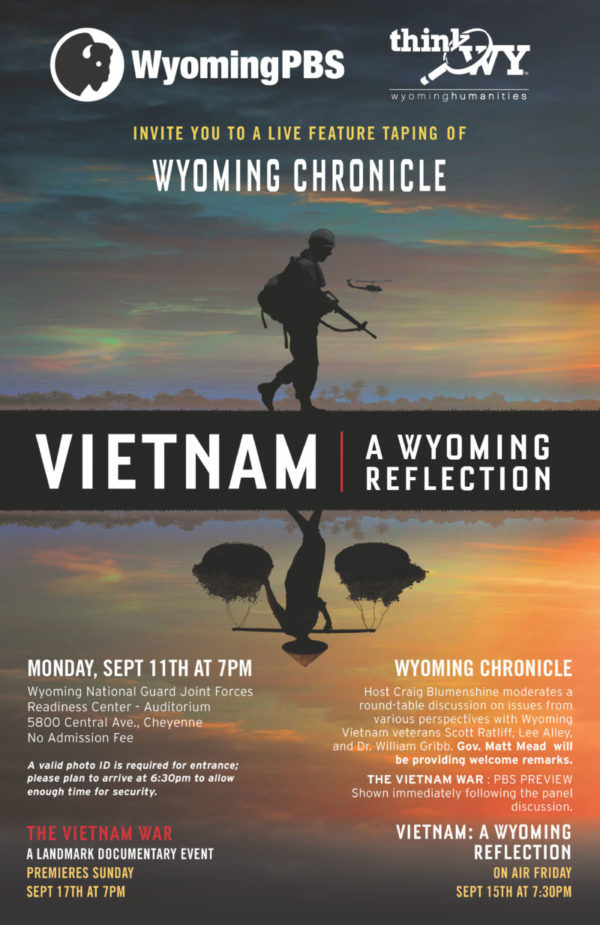 Each arrived to South Vietnam with different experiences, but one item was eerily similar – the time before they went out to the field.

“I was out in the field within three days of getting in Vietnam,” Gribb said, who also noted he had a brother there in 1965. Alley was in country for two days before being told to get in a jeep and head to his unit, which surprising to him was an infantry unit, not tanks. “I’m an armor officer,” he told the sergeant driving him. That mattered little to the need to put officers in empty slots.

Something veterans from today’s wars in Iraq would be able to empathize is the heat Vietnam vets experienced immediately getting off the planes. But worse was the smell as they described it.

“Heat was unbearable, but the smell was with you forever,” Alley said. Ratliff compared it to a locker room in Texas.
Further questions touched on the political situation back home in the states. To Alley that mattered little to him as he led a platoon of soldiers in the wilderness of Vietnam.

“My mission was to get my men home alive,” he said, emotionally as he added he lost soldiers over there as well.

Ratliff admitted he had questions pop up. “What are we doing? Questioning that and it was in the back of your mind, but you had to mentally focus on the present so you could survive.”

Vietnam was a high intensity environment, meaning contact with enemy troops was highly likely, and could be constant. Each man dealt with the combat in their own way.

“I saw guys re-up multiple times and find their niche over there,” Ratliff said. That niche was the ability to perform in combat.

Lee admitted that the killing became easy, when it happened, and he could feel himself slipping to the dark side. “It made me start to worry,” he said.

All three admitted they didn’t include descriptions about the combat in their letters and recordings home. Each would return home to a different world than when they left.

“When we came back, it was tough,” Ratliff said, noting that protests were starting up stateside and the anti-war movement was growing. Some of the negative reaction would come from veterans too, as Alley had an older veteran tell him his group of vets won their war.

After that incident Alley said “I didn’t step in an American Legion or VFW for 30 years.”

“Those same Vietnam veterans are the ones who stepped up and changed this country for the better,” he said during the taping.

The Wyoming PBS “Wyoming Chronicle Vietnam: A Wyoming Reflection” will air on Sept. 15 at 7:30 p.m. and be followed by Ken Burns’ Vietnam documentary. A re-air of the taping will be on Sept. 16 at 6:30 p.m.